Art in the Park Header (sculpture)

I grew up in the western suburbs of Chicago and joined the Navy at 17 years old. As a young man I traversed the world three times in aircraft, but I never sailed on a ship. I earned my way into the Navy Seabees, a combat support unit that started in World War II building runways, repairing roads, and building infrastructure in combat zones. I learned a wide variety of construction skills from carpentry to cement finishing, heavy equipment repair, welding pipe and structural steel. It was my welding experience that led me to pursue a dangerous and exciting career as a union ironworker high above the city skyline.

Some of my experiences in Mogadishu, Somalia left wounds on my mental health that were difficult to deal with. I spent a lot of time and energy trying to subdue my traumatic memories with alcohol until I sought help from the Veterans Administration. In 2014 I began to develop my skills as an artist by dismantling worn out machines. Taking apart typewriters, sewing machines, and garage door openers was something I could do to keep my hands busy when I woke from nightmares and could not go back to sleep. I began to quietly rivet and bolt together the pieces I had harvested, and I began to create small pieces of art. I purchased a welder for my garage workshop and really started to put together my earliest scrap metal sculptures. In 2018 I showed my work for the first time publicly in an art show for Chicago Veterans Art Initiative, followed shortly after by my first experience in an art gallery in Morris, Illinois. I had finally found a way to focus my racing mind and occupy my shaking hands and I was finally able to regain a sense of confidence and enjoy sharing my art with others.

I have had my work on exhibit at Northern Illinois University Art Museum, Veteran Art shows in Texas, Denver, Chicago and Michigan. I have created artwork from the famous Old Joliet Prison that is on display in the Illinois State Museum Lockport Gallery. I am proud to have won a national award in 2019 for using art as therapy for Post-Traumatic Stress Disorder (PTSD). I have found a healthy way to focus my anxiety into art, and a way to inspire other veterans to pursue art and music. I am truly grateful to have supportive friends behind me as I find new opportunities to share the healing power of my art with the world.

Steve continually searches for new opportunities to share the healing power of my art with the world.

I specialize in mediums of, printmaking, painting, and illustration. I was born in Busan, South Korea. My works are mainly based on the observations of my childhood memories and current daily life, and a process in which I try to re-discover and re-generate those moments by synthesizing or alienating familiar objects such as cooking utensils or sewing machines. Through diverse media, I ultimately try to create intricate sympathy and narrative healing experiences as a woman. I hold BA and MFA degrees in printmaking from Hongik University under the guidance of Seungyeon Kim.

Steve Kost has several pieces available for purchase. Please view the images for pricing and more information. Once you’re ready to purchase a piece, please complete the form below. 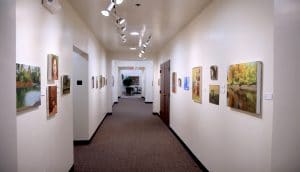 The Springer Cultural Center offers local and regional artists a professional venue to display their work. Springer hosts six professional art exhibits each year. These art shows are determined by review of applications.  Proposals are accepted for solo or collaborative group exhibitions on an ongoing basis.

Artists are responsible for having artwork ready to hang, and for any shipping expenses/insurance while artwork is being transported to or from the Springer Cultural Center and throughout the exhibition. Artists have the opportunity to give a brief talk about their work at a reception provided by the Park District.  Please see below for the Professional Art Exhibit Application.

If you are an artist that would like to be considered, watch the video for information and please fill out the form below.

Exhibitors receive marketing support from Champaign Park District in the form of: