As we learned this summer with the 30th anniversary of the ADA, Champaign-Urbana has made history paving the way for accessibility and rights for individuals with disabilities. Some credit our inclusive city to be the birthplace of the disability rights movement.

One of the most important individuals in accessibility history is none other than Dr. Timothy Nugent. His efforts began an idea that no matter what one’s ability level is, they deserve access to education and recreation.

Where Dr. Nugent started his advocacy journey was disabled athletics. After spending time with veterans with became paralyzed in WW2.

His efforts sparked a fire across the world which caused a momentum that is still rolling to this day–The Paralympic Games.

The Paralympic Games is a goal for many disabled athletes around the world. For these high caliber athletes with disabilities, finding the right colligate program is crucial to achieve this goal. Besides being named the Team U.S.A. Track Paralympic Training site, the wheelchair athletics programs through the U of I has a history of producing Paralympic athletes. 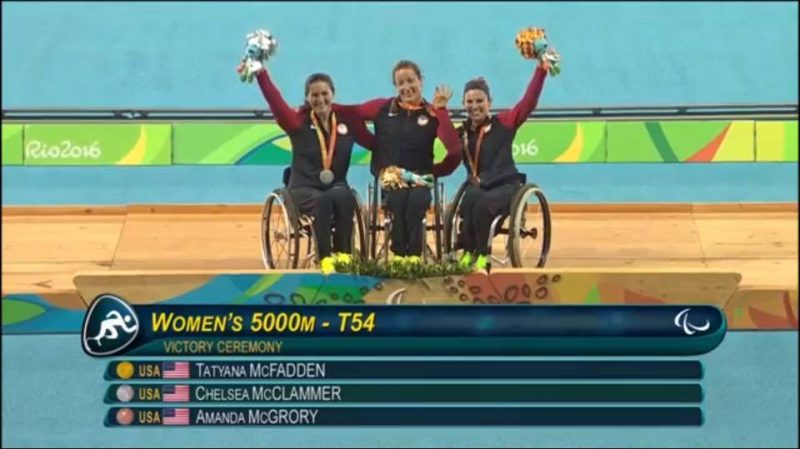 Here are the Paralympic athletes that have been honored at our Olympic & Paralympic Monument in Dodds Park: 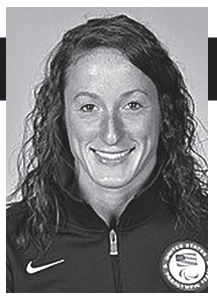 Tatyana McFadden was born in St. Petersburg, Russia and adopted at age six. She grew up in Clarksville, MD and later attended the University of Illlinois where she played wheelchair basketball and wheelchair track.

McFadden competed in her first Paralympic Games in 2004, has competed in every summer Paralympic Games since then, and is now a ten-time Paralympic medalist with three golds. In 2013, McFadden was encouraged to try Nordic skiing and went on to win the silver medal in 2014. In 2016 she won a medal in all six of the individual events she entered, winning four gold and two silver medals. McFadden won gold in the 400-, 800-, 1,500- and 5,000 meter and silver in the 100 meter and marathon.

Most recently, Tatyana produced a Netflix Documentary, Rising Phoenix! You can learn more on what it’s like to be a Paralympian now in your home. The first step to equity for all is through education. This is an easy way for our community to learn about a culture that began here!

Visit her website for more information on her other awards and accomplishments…like being in the Guinness Book of World Records! 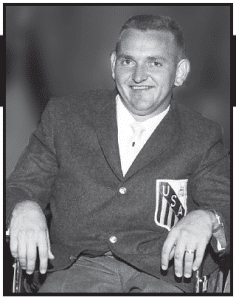 In 1960 Wayne Broeren represented the U.S.A. at the Paralympic Games in Rome, Italy, winning gold medals in basketball and archery. It was in late 1959 when several “old” players organized the Black Knights, who performed in benefit games against able-bodied players, with proceeds going to charities. Broeren participated for several years. 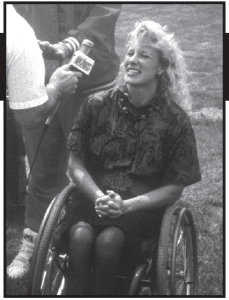 In 1988 Ann Cody-Morris placed sixth in the 800 Meter Women’s Wheelchair Track event in the Seoul Olympics.Two years later she placed first in the 10K National Championships in world record time. 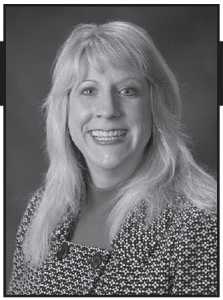 During her career, Jean Driscoll was the first eight time winner of the Boston Marathon. She set 5 new course records as well as 5 world best times. She has held Boston’s fastest time since 1990 in the women’s wheelchair division. It currently stands at 1 hour, 34 minutes and 22 seconds for the 26.2 mile distance.

In addition to her success in Boston, Driscoll also won two Olympic medals, 12 Paralympic medals, and still holds the world record in the 10,000 meter (6.2 mile) track event that was set during the 1996 Paralympic Games in Atlanta, Georgia. Driscoll remains the only 12-time champion of the Lilac Bloomsday 12K Road Race held in Spokane, Washington and still owns the course record in her division from 1995. 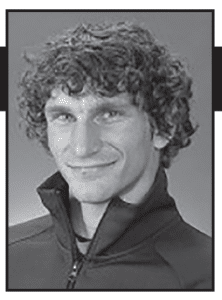 Joshua George first started racing at age seven before getting serious about the sport during his junior and senior years at Herndon High School in Virginia. At the University of Illinois, George focused on wheelchair racing after winning two bronze medals (100m, 400m) at the Athens 2004 Paralympic Games. George competed in the London 2012 Paralympic Games earning a bronze medal (800m). He went to the Beijing 2008 Paralympic Games and claimed a gold (100m) and a silver (800m) medal. In 2016 George competed in Rio in five events, claiming two 5th place (800m, 5000m) and one 7th (400m) finishes.

He currently lives and trains in Champaign. 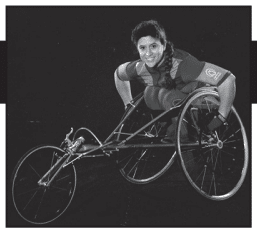 Terri Goodknight graduated from Urbana High School in 1987 and has a B.S. in Education from the University of Illinois. 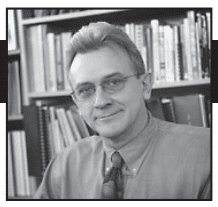 Brad Hedrick was a member of the1980 U.S.A. Men’s Wheelchair Basketball Team at the Paralympic Games in Arnhem, Netherlands This team won the bronze medal. He was a silver medalist in the 1st World Wheelchair Marathon Championship, 1984 World Wheelchair Games in Stoke-Mandeville, England.

He served as the head coach of the U.S.A. Women’s Wheelchair Basketball Team. They won the gold medal in Paralympic Games held in Seoul, South Korea in 1988.

Hedrick has lived in the county for over 30 years and retired from the University of Illinois. 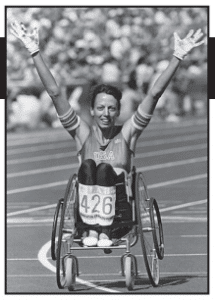 Sharon Hedrick received gold medals in both of her appearances in the Olympic Games. Because of this, in 1988 she was named the United States Olympic Committee Athlete of the Year, Wheelchair Sports.

Hedrick is the only female athlete in history to have earned medals in three summer sports (swimming, track, and wheelchair basketball) at three different Paralympic Games. She was the first and only person to earn Olympic and Paralympic gold medals in the same year (1988) and the first female player to be inducted into the National Wheelchair Basketball Association’s Hall Of Fame (1994). 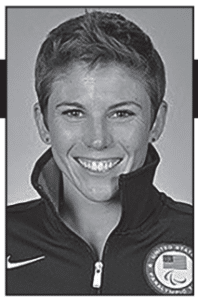 Amanda McGrory started out playing basketball before moving to track and field. She competed in both sports at the University of Illinois, graduating in 2010 with a Bachelor’s degree in Psychology.

She lives in Champaign where she continues to train and work part time. 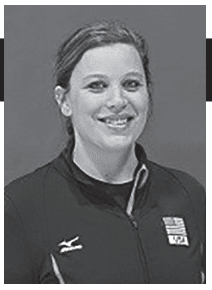 Nichole Millage graduated from Centennial High School in Champaign in 1995, where she played volleyball and softball all four years.

In 2008, Millage was the sixth-leading scorer on the U.S.A. Sitting Volleyball Team who captured a silver medal at the 2008 Paralympic Games in Beijing. She finished with 23 points in the tournament from 12 kills, eight blocks, and three aces. She came in as a substitute in the semifinal match against the Netherlands and totaled eight kills and five blocks to lead the U.S. to the victory in five sets. Overall, Millage played in 12 of the 17 sets in Beijing.

Millage was a member of Team U.S.A. again at the 2012 Paralympic Games in London. She won her second Sitting Volleyball team silver medal during the games.

In 2016, Millage competed in her third Paralympics on the U.S.A. Sitting Volleyball Team. This time her team earned the gold medal. 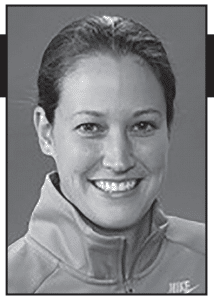 Jennifer Ruddell has established herself as one of the top women’s wheelchair basketball players in the world and she has experienced no shortage of team success along the way. She helped lead the U.S. to the gold medal at the 2007 Parapan American Games and was also part of the team that won gold at the 2004 Paralympic Games in Athens. In 2008, Ruddell was co-captain of Team USA as they won the gold medal for the second consecutive Paralympic Games.

Ruddell and her husband, Ben, recently moved to Gilbert, AZ., where she
works full-time as an Assistant Professor of Sport Management of Online Education at Shorter College (Rome, GA). Prior to her move, Ruddell lived in Champaign, where she was a visiting assistant professor at the University of Illinois’ Recreation, Sport, and Tourism Department and a part-time faculty member at Parkland College in the area of kinesiology. 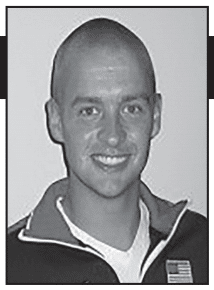 Brian Siemann was raised in Millstone, NJ. He was introduced to track & field his freshman year by his high school coach. His first racing chair was donated by his coach, high school staff members, and Project Freedom.

In 1960 Jack Whitman was selected as a member of the U.S.A. Wheelchair Olympic Team that would compete at Rome, Italy. Whitman won three gold medals in archery, thus becoming the first wheelchair athlete to win a gold medal. He also claimed the silver medal in table tennis.

Whitman won a total of 11 gold medals in the Paralympic competition in the field of archery.

Whitman was elected to the National Wheelchair Athletic Committee and served as the U.S.A. Wheelchair Archery Coach from 1967 through 1978.

His Archery career was topped off in 1971 when he was inducted into the United States Wheelchair Sports Hall of Fame. Whitman was recognized as America’s Father of Wheelchair Archery.

Whitman also headed up the Babe Ruth Baseball program in Champaign for more than 12 years and was named an honorary board member of the Champaign Park District. 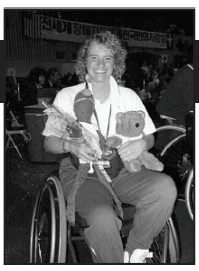 Barbara Yoss graduated from Urbana High School 1982 and received a B.S. from the University of Illinois in Leisure Studies in 1987. While at the University, Yoss was a member of the Women’s Wheelchair Basketball Team.

In 1996, she volunteered at the Paralympic Games under the direction of fellow Parlympic and Illinois teammate Ann Cody. 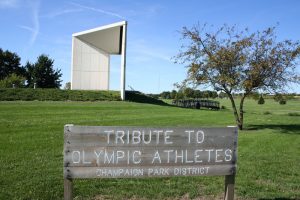 For more information regarding our Olympic & Paralympic Tribute and how one is honored, visit our mobile app or website today!