A Night With Janis Joplin 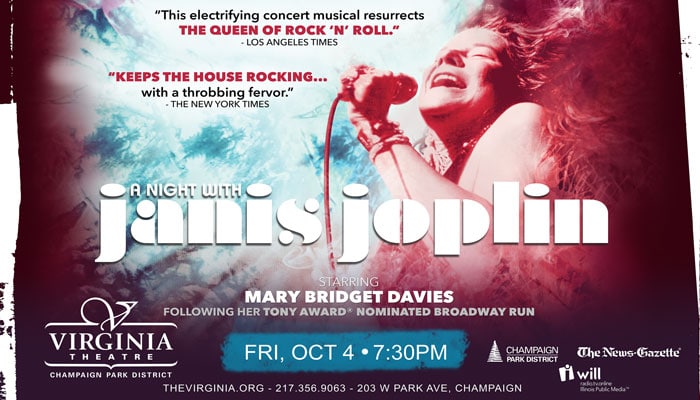 A NIGHT WITH JANIS JOPLIN – The Broadway Musical/Concert starring Mary Bridget Davies – is coming to Champaign this October 4th!

Like a comet that burns far too brightly to last, Janis Joplin exploded onto the music scene in 1967 and, almost overnight, became the queen of rock & roll. The unmistakable voice, filled with raw emotion and tinged with Southern Comfort, made her a must-see headliner from Monterey to Woodstock.

From Broadway to our town, now you’re invited to share an evening learning about the life and influences of Janis Joplin in the hit musical, A Night with Janis Joplin, starring Mary Bridget Davies.

Fueled by such unforgettable songs as “Me and Bobby McGee,” “Piece of My Heart,” “Mercedes Benz,” “Cry Baby” and “Summertime,” a remarkable cast and breakout performances, A Night with Janis Joplin, written and directed by Randy Johnson, is a musical journey celebrating Janis and her biggest musical influences – icons like Aretha Franklin, Etta James, Odetta, Nina Simone and Bessie Smith, who inspired one of rock & roll’s greatest legends.

Mary Bridget Davies is an American singer, actress, and interpreter of Janis Joplin’s music. She received a Tony Award nomination for Best Lead Actress in a Musical for her performance as Janis for the Broadway production of A Night With Janis Joplin.

May include adult subjects/language – for mature audiences.