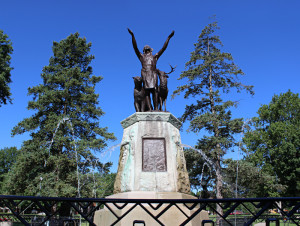 One hundred years ago from atop the Prayer For Rain fountain, the likenesses of an American Indian, a panther, and a deer began keeping watch over Champaign’s West Side Park. The fountain and sculpture have come to mean many different things to many different people.

For two years (’98-’99), the Champaign Park District had taken steps to restore the fountain to its original appearance when first dedicated on June 1, 1899. After a year long absence for restoration purposes, the sculpture atop the fountain was returned just in time for a rededication celebration on Saturday, June 26, 1999.

Prayer For Rain
by Edward Kemeys
The Indian paused by the hills’ wild crest
Where the hemlocks throw their shade,
He looked o’er the land where the burning west
A river of flame had made.
The suffering Earth was parched and dry
Neath the fierce Sun’s molten glare,
For drought had drained rivers afar and nigh
And a thirst was everywhere.
Then lo! as the Medicine-Man on high
His arms upraised in prayer
Forth came two beasts from the river bed dry
And pausing, they joined him there.
The first was a panther, cruel and grim
The other was a wild deer shy;
And they raised a prayer for rain with him
To the Manitou on high.